Last week I read an article related to the problems that parents have with limiting “screen-time” on their children. I’ll admit, it can be a bit of a problem at times, and kids are kind of expected to always play with toys, ride their bikes, play a sport, read; anything really that isn’t technologically related. So it got me thinking about gaming, what effects it can have on the next generation but also linking it to the here and now. Now I’m not going to lie, I’m a games enthusiast but will do my best at impartiality.

The majority of us that call ourselves humanoids will probably spend anything from a few minutes to hours each day directly linked to a piece of tech. I don’t work in an IT specific job (I work in a school) but I could send a dozen emails for work, researching for a student or data analysis and there are days, like many of you, that could spend their working day in front of a screen. I’ll check the news on my breaks, have a quick flick through Twitter and maybe Facebook but I certainly don’t spend hours like some do, maybe 30 minutes in total. Even before I squeeze in some gaming time or watching a movie with the kids I’ve already spent over half my day connected to technology in some way (yesterday was Star Wars Episode One; my wife and kids enjoyed it while I, like many, reeled at the overuse of CGI and lack of story depth). But that’s the reality of our lives today, living in the technological era. 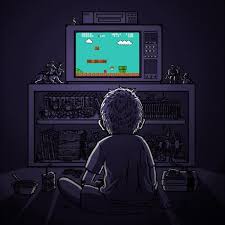 After that tangent, here’s my argument for gaming. Like anything, excessive use/consumption of anything has a detrimental effect on a person. Ice cream is damn tasty but too much can lead to weight, diabetes, sickness; you get idea. Gym, work, not spending enough time with family, spending too much time with family, it all needs a healthy portion to benefit us. My son is seven and today he spent an hour this afternoon playing Star Wars Battlefront. During this time, he played with his younger sister (4 years) and through the entire hour they were talking to each other, my eldest teaching my youngest, communicating, engaging, using imagination to narrate a story while playing. I mean the story was ridiculous of course, where a rebel would hide his rocket launcher when not equipped was a particularly interesting chapter!

There wasn’t a negative at all in their play time here, but there’s still that scepticism and news articles almost condemning it all. Maybe, as adults who have entered this new technological era, we are afraid that our reliance on it all (TV, Internet, Xbox live) will become instilled in our own children and some are looking for proof of negative repercussions – ironically probably by using statistics, Internet research and digital surveys. It is a part of our lives, part of almost every job, it just needs to be enjoyed in moderation.

I for one would certainly not condone a whole day of gaming…*cough*.

3 thoughts on “Gaming – the younger generation”