There’s nothing  wrong with loving a whole load of games. A melody of genres probably makes up the collection of many, depending on what mood you fancy. But there are those that simply make you tick, that as soon as you see or get your mitts on know that reality will fall away as you tumble into something that will consume many hours to come. There are those games that define us, that will forever bring a sense of nostalgia just by seeing or hearing it again. For me, these are those games that defined my “way of life”.

The only one I actually completed, even though FF9 took over 120 hours, Eight was probably the first big rpg I spent hours into the night playing. Released in 1999 it had a lot to live up to with Final Fantasy 7 being such a big milestone in gaming history. From the free-roaming ability to having awesome weapons like the gunblade (Lionheart anyone?) it hit all the buttons for my early pubescent years. And the cut scenes were a pure delight with the final space scene, including the soundtrack, instilling that sense of completion achievement I’ll never leave behind.

When a theoretical theorist turned action hero by the name of Gordan Freeman becomes one of the few survivors of an experiment in a secret lab, what is there not to love?

This wasn’t the first FPS I played, but it may have been the first I played on my PC – the heap of junk it was back then with it’s 256mb of ram. This was one of those games that paved the way for its’ predecessors with the story depth being layered so well even the sci-fi nature of it, pushing the boundaries of how real it could be, scared the bejesus out of me at times. This was mainly down to the entire game being from the viewpoint of Freeman, all the scripted scenes, all the conversations. You were Gordan from the start and to the end, through the labs to a teleportation to an alien planet. Simply awesome – and the long-awaited sequel did a similar job at breaking rules!

The above image was possibly my first ever desktop background – that I can remember at least. Released in 2002, this RPG was another of my early PC gaming experiences and an early third-person RPG that most follow today.

This time it’s a farmer, not a scientist, so the chances of being transported to an alien planet is instead replaced with bumping into a fellow farmer needing help along your story. Farm-sized arachnids do make a guest appearance. XP, gear, potions, it was all here with yet another example of seamless play and no loading – what every new game seems to struggle with these days. It was an open-world game with the odd bit of humour and it just tickled me pink.

Another PC FPS and my first ever experience of a LAN centre  when I was 14 but what this brought to the table was a competitive multiplayer experience. The whole game is based around multiplayer action with some bot rounds to help practice with or if your dial-up connection was taking longer than it’s usual 20 minutes to connect to your ip.

Although the original was fantastic, my fonder memories were of the 2003 edition. Other than a massive graphic and mechanic overhaul the highlight of the game was the announcer for the characters. It was just hilarious and “Mr Crow” and “Romulus” became a regular call sign for a college mate and I. Here’s a link I just found and luckily, the juice in my mouth at the time only just missed my laptop after hearing it for the first time in 10 years or so – blimmin’ priceless! https://www.youtube.com/watch?v=QQ82zI_In90

Jumping forward a little but also to get a strategy game in the mix Halo Wars has become one of those new-age cult games. Set in the Halo Universe 21 years before Master Chief’s first appearance the detail in keeping to the original story and a few familiar faces alongside some impressive cutscenes make this one of my all-time played games. RTS had been tried on consoles before but the controls were both easy to learn, impressive to master and fantastic to battle with. 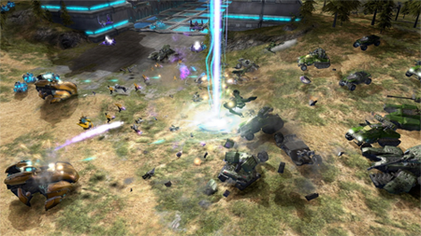 What was so surprising to me is that there never seemed to be that many players online when on the 360, but now that backwards compatibility has announced its arrival (even though it has been delayed!) the request votes have reached about 50k which is a ridiculous comparison to the 2k players maximum I probably ever saw on the multiplayer. You can pick up a copy off ebay for around £5 at the mo and if you’re interested the long-awaited (on my behalf) sequel is released later this year, developed by Creative Ensemble, the guys that brought us the Total War series.

That’s not it of course, there are plenty of others to ramble on about such as an endless setlist achievement or progressive raiding on WOW – that will need a whole article of its’ own – but these have created fond memories that will stay with me forever.

One thought on “Games that make you, you”